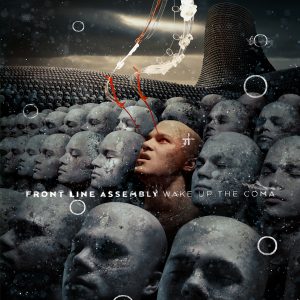 Electro-Industrial act Front Line Assembly are back with their first album is six years, ‘Wake Up The Coma’, which I think is their 19th album under the FLA banner. It is out now through Metropolis Records. FLA have evolved consistently throughout their lengthy career, managing to sound relevant throughout without loosing their identity, which is quite the trick. ‘Wake Up The Coma’ is another strong album, instantly recognisable as FLA while also keeping us listeners engaged with a few fresh twists.

To my ears this is their poppiest album is some time, though throwaway it isn’t and a few listens are required before the hooks are firmly lodged in your memory. This album also sees the classic FLA duo of Rhys Fulber and Bill Leeb joined by a number of guests throughout the album, no doubt bringing to mind the collaborative nature of FLA related project Delerium to some of us. These guests include Jimmy Urine (Mindless Self Indulgence and Euringer), Robert Gorl (DAF), Nick Holmes (Paradise Lost) and Chris Connelly (Revolting Cocks, Cocksure). Notably the album features the last contribution from Jeremy Inkel who passed away in 2018 aged 34 due to complications from asthma.

The album starts with ‘Eye On You’, a mid paced track featuring guest number one Robert Gorl. It is a solid track, though perhaps doesn’t immediately grab your attention .Its hefty low end and nuanced production reward repeat listens. The opening track is followed by ‘Arbeit’, which punches harder and faster, an energetic number bristling with attitude and a chorus that boasts a hook and a half with its menacing vocoded vocals. Track number three is a curve ball for sure. FLA are not particularly known for their love of cover versions, so the inclusion of Falco’s ‘Rock Me Amadeus’ is sure to raise eyebrows. Jimmy Urine handles the vocals incredibly well and the feel of the track retains much of the originals cocky bombast but for me it doesn’t fit on the album particularly well. Front Line Assembly create albums with a sense of foreboding and darkness about them, and this cover distracts from the vibe of ‘Wake Up The Coma’, albeit a well executed version. ‘Tilt’ lands next, powerfully meaty, and reminding me somewhat of their industrial comrades Skinny Puppy in their ‘Too Dark Park’ era. Next is ‘Hatevol’ which boasts a fantastic bass line, punchy percussion and a chorus hook up there with their best. ‘Proximity’ is delicious dark synthpop. The kick and snare are still as hard as nails, but the verse synths have a melancholy and emotive feel that I love, a finely crafted track. ‘Living A Lie’ is another higher tempo track, aggressive yet accessible, the top notch production again working wonders delivering another strong song.

The title track is a definite album highlight and sees guest number two enter the fray, Paradise Lost’s Nick Holmes. The tracks is a heady mix of percussive breaks, guitar stabs, throbbing bass synths and a cracking vocal performance that has hints of Jaz Coleman. The result is damn catchy and leaves you wanting more from this pairing. ‘Mesmerized’ doesn’t let the side down either, sounding vital and insistent, and laden with nifty touches that that keep drawing me back for another listen. FLA show their versatility once more with ‘Negative Territory’, that trades pace for simple and emotive power for what is another album highlight. The chorus, and indeed the whole track, is sublime, a thing of beauty. ‘Structures’ is the penultimate song that initially struggles to live in the shadow of its predecessor but soon comes into its own with a snappy sound and yet another enjoyable chorus. The best is saved until last though with another curveball. Chris Connelly steps up to the mic for ‘Spitting Wind’, and delivers a vocal performance up there with his best. Sonically, all the FLA ingredients are present, atmospheric synths, ballsy bass, tight and intelligent percussion, but somehow this collaboration has revealed an electronic masterpiece, Bowie-esque and grandiose and simply wondrous.

Quite how FLA sound so vital so far in to their career is baffling, but they do. ‘Wake Up The Coma’ is an album of depth, variety and pure quality. The highlights stand next to and perhaps above some of their career highs. The production is unsurprisingly top drawer and only assists in making these well crafted songs shine. As hinted earlier, this is an album that reveals its strengths over time, on first listen it was good, but now I think it is great. For some bands, the introduction of guests can seem opportunistic and trite, but here is works very well and I hope they continue to be open to such collaboration in the future. I still cannot help but feel that the cover version distracts somewhat from the depth and tone of the rest of the album. Overall though, FLA have released an album that is brimming with strong and stronger songs that is set to become one of my favourites from their long and exemplary career.