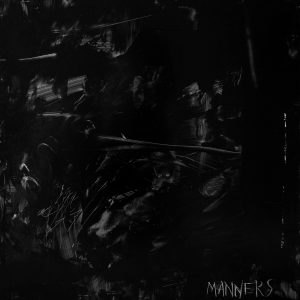 FTR are my new favourite band, they are that cool. They shimmer, they bristle, they are black metallic. But I am getting ahead of myself. Firstly I should probably introduce the band, for the uninitiated out there.

They are a trio hailing from Paris, France who have been in existence since 2013. This is their new album ‘Manners’ which follows an EP, a debut album and a few singles, and it finds a release through the esteemed Metropolis Records.

So why do I like FTR so much? As soon as I pressed play I was hooked. They manage a rare thing, taking elements of all the good things about dark alternative music of the past few decades and forming a new musical compound that sounds fresh and vibrant. I hear early Sisters of Mercy and Cure in the baselines, I hear Curve at their noisiest, I hear Alien Sex Fiend at their most fiendish, and all this is smothered under fuzzy shimmering guitars in the vein of early Catherine Wheel or The Jesus and Mary Chain. But FTR do not sound retro or nostalgic, to me these reference points seem to be casual nods backwards while the rest of the time their steely gazes are solidly locked forwards as they hold on tight. The results are thunderous and the album begs to be played very loud indeed. That’s why I like this album, it contains all of my favourite things.

The album wastes no time, launching with the single ‘Collisions’, high tempo and full of black clad swagger. The intensity and panache with which it is delivered does not abate as track after track both pound and ooze out of the speakers in equal measures. It is hard to choose highlights though ‘Chances’ is electrifying and ‘Sunrise’ somehow manages to sound both warm and cold at the same time. ‘Never’ captures the brash electro of early Mute days, and closer ‘Breathe’ leaves you taking a gasp of air when the wall of noise finally fades.

Reading back, I realise I’ve made the album sound very noisy, and true, it is. However, it is more than this. These aren’t crude slabs of pulsating sound, they are crafted into songs laced with hooks. The album ebbs and flows as the band use shifting dynamics to sultry effect. In short, ‘Manners’ is thrilling in a way I do not encounter often enough. I hope that the impending UK exit from the European collective does not dissuade FTR from visiting these shores as I would dearly like to see them play this material in a dingy smoke filled club somewhere.