From The Bogs of Aughiska – Mineral Bearing Veins 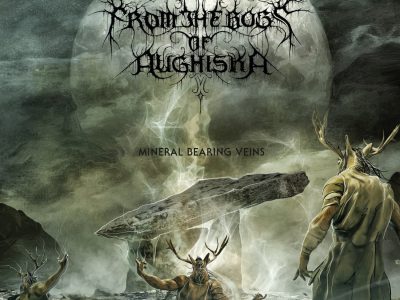 ‘Mineral Bearing Veins’ is the third album by Ireland’s From The Bogs Of Aughiska and one that displays an increasingly metallic component to their sound while retaining the dark ambient and storytelling elements that set them apart from pretty much anyone else. It is released on Apocalyptic Witchcraft records.

I am openly an appreciator of this band, so much so that I invited them to contribute to a sampler released on my own micro label Sonic Entrails and also to the soundtrack of my début film The Doxey Boggart. I also have a patch of theirs glued to my jacket. You get the idea. I was therefore understandably eager to hear their latest creation.

Now, some things have changed since 2013’s ‘Roots Of This Earth Within My Blood’ and 2016’s ‘Fenian Ram’, most noticeably in that the band line up has swelled to include members of from Belinus & Mortichnia and a former member of Alter Of Plagues. As one might suspect, this has resulted in a shift further towards black metal territories, but has also meant that the album has been composed as a band rather than individuals. The result? Read on…

The magic that captivated me has always been those traits that set them apart, the Gaelic storytelling that weaves in and out of their previous releases, their willingness to experiment with sounds and approaches not found too often within other black metal and associated styles. These elements are thankfully still a large part of the sound on ‘Mineral Bearing Veins’, and dark spells continue to be woven over the distance covered by this release. However, to borrow a phrase I heard from a friend of mine, these passages are ‘bookended’ by walls of harsh black metal, sometimes very harsh black metal. My initial reaction, I’ll be honest, was to switch off to these passages and await the next swelling blackened ambient section, or the next piece of spoken word, but repeated listens has helped convince me that these more prominent and sometimes difficult black metal passages do work, they provide and increase in the contrast between height and depth, darkness and light, weight and air, pressure and vacuum.

‘Mineral Bearing Veins’ yields fragile melodies underpinned by ominous sub bass rumblings (Scuabtuinne), spoken passages and tales (Wake of Buzzards, The One Whitethorn Bush), sung folk music (An Spealadoir) and black metal/dark ambience sound clashes (Poll An Eideain, Crataegus) and more. This provides for a dynamic and engaging listening experience. My personal highlights are ‘The One Whitethorn Bush’ that tells the tale of a fairy tree and a kink in the road, I’ll say no more, and ‘An Spealadoir’ with its lilting folk music vocal descending into and then majestically emerging from a harsh ambient sound field.

A challenging and ultimately rewarding third album from From The Bogs Of Aughiska.