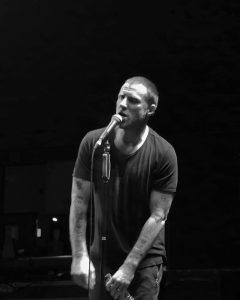 It seems fitting that I am reviewing a Sleaford Mods gig on the day that over a million people descended on London to protest against the government’s handling of a certain Brexit while 4 million people also sign a petition regarding the same divisive subject. On stage, one of the crew is wearing a ‘Bollocks to Brexit’ shirt. Protest. The every day person choosing to use their voice. That pretty much for me sums up the engine in the vehicle that is Sleaford Mods and is the reason I like what they do a lot. Their message is thought provoking while remaining entertaining, and they are an act of action as well as words. I particularly enjoyed the film they were involved with as part of the ‘Invisible Britain’ project.

Tonight they play the Birmingham O2 Institute, a rather larger venue than last time I saw them in 2015 in Stoke On Trent. Sleaford Mods have made a point of playing venues off the beaten gig circuit, with this tour no exception. However, tonight they are in our second city and the healthy sized audience is testament to how Sleaford Mods have steadily grown their following over the last five years or so.

I arrive just in time to see the tour support, and band called Lines who hail from Manchester. With a sound that encompasses post punk and fuzzed out alternative rock, this three piece are well received by the filling room. They have plenty of substance and clout, tub thumper Leila O’Sullivan provides a hefty percussive assault with the snare especially potent. Tamsin Middleton snakes out the bottom end bass lines while Zoe McVeigh provides the lead guitar bite and vocals delivered with impressive gusto, think L7 and PJ Harvey and you get the idea. They waste little time as they earnestly fire out their material, with each song lasting no longer than it needs to. The hooks are subtle and minor key, and solid enough to make an impact on first listen. With a couple of singles and a début album ‘Stop Start’ behind them, the future is looking bright for Lines.

Sleaford Mods are not your typical act. If you want to go to a gig and admire the skills of the musicians on stage, you’re in the wrong place. If you want rock and roll shenanigans, you’re in the wrong place. If you think that to be a real band you need a drummer, again, you’ve wandered a little astray. However, if you crave an experience driven by anger and passion, a word and sound distillation of the outrage felt by the forgotten, then welcome in. The good news is that Sleaford Mods are here to deliver just that, and the added bonus is that they do so with wit and grooves.

The Nottingham due of Andrew Fearn and Jason Williamson appear on stage. In a live capacity, Fearn is somewhat of a ‘start stop’ guy in control of the laptop, with the rest of his time occupied doing a shuffle step dance with one hand in pocket and the other clutching a beer. Somehow he does this in such a way that he has the affections of the audience, and he knows it if the frequent cheeky grins are anything to go by. However, most eyes are on Williamson, and he is undoubtedly a compelling presence. Fearn presses something on the laptop and Williamson is unleashed once more. Diatribes filled with acidic wit and scorn pour forth, impressive when heard but more so when seen too, as his whole being writhes, jerks and bristles in front of the microphone. I’ve never seen anyone move around stage quite like this fellla. Sound wise, the beats, loops and grooves are largely a vehicle for Williamson to launch from, but they are often infectious and perfect for getting bodies in front of the stage moving. If you have seen or heard Sleaford Mods at any point you’ll know exactly what I mean, but for the uninitiated, imagine cut up scuzzy bass guitar lines and high tempo punk funk drum loops mixed together in a very grimy kitchen sink.

Over recent albums, the sound hasn’t radically evolved, but Sleaford Mods are what they are and if it ain’t broke… This tour supports the release of their latest album ‘Eton Alive’, which has spent a lot of time on my turntable platter. Tonight’s set pulls heavily from this album which is to be expected and I am more than happy to hear. I am right down the front for the beginning of the set and the new material has as much impact as anything they have delivered before. ‘Flipside’ and ‘Subtraction’ are particularly vicious and the crowd eagerly respond. Williamson’s vocals cut nicely through the sounds delivered by the sticker plastered laptop which are loud enough to vibrate several internal organs. A few songs later and my hearing aids are struggling with the volume so I drop further back. Towards of the rear of the venue the vocals become a bit lost through reverb and crowd noise which is a little frustrating as the message is what makes Sleaford Mods so vital in todays music and spoken word scenes. The gig progresses through an ‘Eton Alive’ heavy set though a selection of older cuts are fired out. Of these, ‘Jolly Fucker’ goes down particularly well, but it is telling that the crowd are lapping up the new material just as much. Sleaford Mods are on a roll. The main set ends with my favourite cut from ‘Eton Alive’, the mid paced and menacing ‘O.B.C.T.’ but the chaps do not stay away long at all before returning for a few more including the classic ‘Jobseeker’ and ‘Tied Up In Nottz’ which rattle the rafters and shake the crowd.

I leave thinking to myself that I am very glad to have seen Sleaford Mods in a smaller venue. While I enjoyed the gig, my other experience with the band felt a lot more direct and the emotion and passion delivered from the stage more tangible. That said, tonight was still a belter for anyone with ears, eyes and minds open to this thought provoking and body moving and ultimately thoroughly healthy racket.