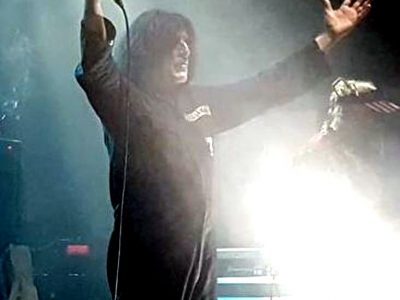 ‘Laugh At Your Peril’ is the title of this Killing Joke world tour, which is part of their 40th anniversary celebrations. For any band to have a 40 year career is noteworthy, but for Killing Joke it is especially so as bands as incendiary as they are often burn out, or fizzle into a more mundane state. Killing joke will, I suspect, never be mundane. The celebrations are set to last two whole years, while this year marks 4 decades since Jaz Coleman met ‘big’ Paul Ferguson, their debut EP and album surfacing a year and two years later.The setting tonight is the beautiful Institute in Digbeth, its classical architecture providing a suitably noble and imposing tableaux for this performance, which is taking place a significant way through their tour which has already taken in north and south America and the rest of Europe. We have two support acts to consider first though.

The first of these were BlackWaters from Guilford. A cursory glance at their facebook page revealed the words ‘indie punk’ which didn’t strike me as something that would fit on a bill with Killing Joke at the top, but I was proven quickly wrong. I was impressed with the confident stage presence exuded by all four members who exuded and energy and threw shapes without showboating. The material contained traits of punk rock, both British and American, but the songs were shot through with something darker, the heavier aspects of underground indie rock. The singer channelled a hybrid of Cocker and Curtis as the rest of the band delivered a bass heavy wall of sound set showing a deft mix of dynamics, tempo and swagger. Nicely played lads.

Main support comes from sometime label mates of Killing joke, Turbowolf. While the band have been active for a decade or so, this is my first encounter with them. As soon as they take to the stage, I have images of Frank Zappa, Monster Magnet and Led Zeppelin flashing in my mind and they craft their art. Analogue synth tones, athletic drumming, very rock and roll vocals and heavy load riffs swirl and convolute through a somewhat muddy live mix. When the riffs and rhythm coalesce, they do so very effectively and demonstrate a technical ability and groovy tightness that is undeniably impressive. Everything they are doing on stage has a sense of fun about it, which on reflection is the reason that I didn’t enjoy them as much as I might have done. The headline act are known for their uncompromising intensity and apocalyptic narrative and this is the mindset in which I arrived for tonight’s show. Turbowolf did nothing wrong as such, but their vibe wasn’t quite at home here to my ears.

Finally we have the mighty Killing Joke, tonight present in their classic line up of Jaz, Geordie, Youth and Big Paul with an anonymous presence somewhere out of the limelight providing the electronic and programmed elements of the sound. I was expecting material from across their prolific and varied career and this they delivered, pulling a considerable amount of material from their self titled debut and ‘What’s THIS For…!’ and sandwiching these with cuts from ‘Pylon’, MMXII’ and a strafing of songs from the albums in between.

They begin their set with old and new respectively, ‘Unspeakable’ from 1981 and ‘European Super State’ from 2010. Then new and old with ‘Autonomous Zone’ from 2015 all the way back to the ‘Eighties’ literally. The set progresses as such with the highlights coming from all eras. Tonight, ‘Follow The Leaders’ particularly impresses, ‘Asteroid’ is frequently stunning live and tonight is no exception. Throughout, a dreadlocked Youth nails down the bottom end effortlessly and Geordie fills the rest of the sound spectrum with his two hands and six strings. Big Paul creates thunder and the end of days and Jaz once more is a man possessed, vibrating with energy and menace. The highlights keep on coming, ‘Corporate Elect’ is an audio and intellectual battering ram, and from the encore, ‘The Death And Resurrection Show’ back to back with ‘Wardance’ are hard to match. ‘Pandemonium’ closes the evening and I doubt many people will leave the venue without a buzz and adrenaline coursing through their veins.

I have lost track of how many times I have seen Jaz and this crew live, and they have been hard to fault on most occasions. Tonight’s performance is up there snapping at the heels of their best performances that I personally have witnessed. At this moment I cannot think of another band that have existed in four separate decades (or even three) and consistently been relevant, vital and intense. There are simply no other bands that can hold a light to Killing Joke in this respect. This band have been Killing it for 40 years, and that is no Joke.