Teeth Of The Sea – Wraith 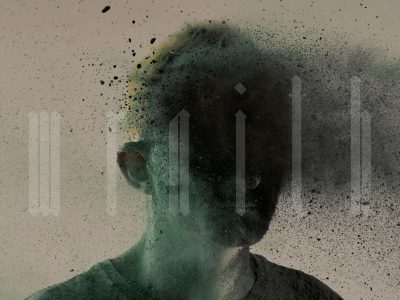 Teeth Of The Sea are not a new name to me, having seen the band live a few times and possessing a partial discography. What I have always found appealing about the band is their willingness to clash electronica with traditional and not so traditional instrumentation. ‘Wraith’ is the band’s fifth album and continues their ethos of bending and melding genres and sounds. It sees a release later this month through Rocket Recordings.

I have enjoyed every release I have heard by TOTS, particularly the predecessor to this album ‘Highly Deadly Black Tarantula’ with its fat analogue sounding synths, hefty bass and generally dark miasma. ‘Wraith’ sounds different, not a departure as such, but the way they have presented themselves here has its own distinct feel, less hefty perhaps, but also more cinematic and vast in scope. Reading a little about the making of the album, the band allude to ‘disturbances’ and presences making themselves known during the recording process, hence the title ‘Wraith’, and at times the album does have a spectral and perhaps unearthly feel to it.

Things get under way with ‘I’d Rather, Jack’, which shoves a low fidelity high tempo beat right in your face without warning, soon augmented by various ethereal contributions from Teeth members. About half way through, the track is joined by a rolling bass line that results in a surge forward, scattered sounds, disjointed voices and glitches all swirling to a conclusion. ‘Hiraeth’ is next, its title deriving from a Welsh word meaning a longing for home. Slower and less urgent, the track builds slowly with ghostly trumpet flirting with the lazily pulsing electronic rhythm. The sound field is slowly filled once more, throbbing low end, soaring sonic clouds above and cavernous spaces between. This analogy suits the album as a whole, as it is a combination of solidity in its foundations and far less corporeal elements forming the superstructure reaching skywards.

‘Wraith’ continues its trajectory combing moments that impose and moments that drift hazily, and ebb and flow of dynamics that is the backbone of the post rock genre that they have expanded wildly beyond the boundaries of. Ambient Morricone-esque one minute, post industrial electronica the next, my attention was kept for the duration of the album, even during the lingering subdued moments. Particular engaging moments include ‘Visitor’ which is a rush of a track with its driving electro backbone, synth arpeggios and the more organic elements swirling turbulently above. ‘Our Love Can Destroy This World’ is another effective slow burner, ominous and throbbing, building tension that is released when the closing track ‘Gladiators Ready’ launches. The lo-fi electronic percussion of the opener returns, jostling for space with pianos, synths and other ambient elements until the domineering acidic synth hook beats them all temporarily into the background before abating as the album bids its farewell.

‘Wraith’ is quite a listen and one that rewards repeated listens. It is well worth playing loud to get an appreciation for the myriad nuances that would otherwise pass unnoticed. This, their fifth album stands on it’s own two feet, perhaps not as muscular as its predecessor to my ears, but more expansive and still very much a Teeth Of The Sea record.